I had heard a million times that Mughal-e-Azam was the biggest & greatest film in Indian cinema history. I saw it yesterday, and i feel it is.

K Asif the creator surely was a talented & determined guy. He made just 4 films in his entire career. He worked on Mughal-e-Azam for 10 long years, from 1951-60. And even though it was made in chrome it cost a staggering $3 million, then, now it amounts to $40 million, thats a budget equivalent of hollywood films. Compare it to Indian economy & you will realise that its god damn 40-50 times costlier than the costliest movies made right now !

He wanted to make a colour version by reshooting the entire film. But his dream remained unfulfilled, till now, when last year it was colourised. 3 Lac frames, retouched, almost drawn again.

The storyline is rivetting & rarely falters. Its to the point, as it should be, no bull shit. Its hard to imagine how Asif, way back then kept the story so much on track when we see even the upper lot of today's filmmakers sway away. 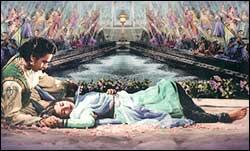 The performances are mind blowing, Prithviraj Kapoor with his modulated deliveries is petrfying. He builds a realistic Shahenshah Jallaluddin Mohammed Akbar. And so is Dilip Kumar as Salim. But his looks dont match that of the character of Salim, nor does his personality on the whole. Akbar feels too large in front of him. Jodhabai, Akbar's wife is the only melodramatically portrayed character. Madhubala as Anarkali is...i dont have words. Her role is finely etched, she is not just the typical "lady" in the story. She shows why she was one of the finest actors of Indian cinema with a charisma.

The songs, well i could connect with only two, i dont think i have the sense to appreciate the others. Pyar Kiya to Darna kya has some amazing lyrics & its colour version is like a kaliedoscope with a million mirrors. The sets, the production, the camera angles, the extras its all done right. The colouring, even better, though some frames do have unnatural skin tones. The dialogues are one the film's strong points, they are just too well written.

Two noticeable things about the masterpiece are, that , one it doesnt lose its substance in the grandiosity & two you dont feel like you are watching something antique, it is truly timeless. Its a spellbinding milestone of Indian cinema & something that more than deserves the title "a magum opus".

Came to know today tht they were showing it last night...