I was thinking about getting a Raspberry Pi for some tinkering at home. While looking for it, I stumbled upon the China mass market made "android sticks" which sell for $50 round about. I decided to give it a shot - expecting hardly anything. The only thing I knew was that the hardware of these sticks was better than the Raspberry Pi. So I took the plunge, and boy was I surprised.

First the specs. For $50 you get lot of value for your money. Dual core 1.6Ghz Rockchip RK3066 SOC, 1G ram and 8g of storage. Add micro sd card slot, HDMI connector and USB OTG cable. Benchmarks put the Rockchip's ARM processor equivalent to Tegra 3 if not better. So this is basically a Nexus 7 equivalent, which you can directly connect to your HDTV. And voila, we have a 46in Android tablet running Jelly Bean. 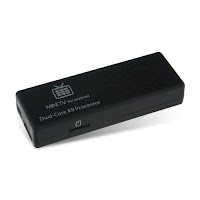 Functionality wise this thing flat out delivers the kitchen sink and more. It does HD display output without a hitch. Netflix, Hulu Plus videos play like a champ, and you get good UI to play with, instead of the rusty and not so often updated UI for these apps on other smart devices like TVs and blu-ray players. It also comes with flash support, so you can play the "watch movie online free" searches natively ;) No need to keep messing around with the PC/TV connectivity.

And then there's the basic Android customization and playfullness that comes with it inherently. You can change launchers, backgrounds, icons, apps; stream music using different services, get notifications, weather - everthing. Much smarter than your smart TV.

The only catch that I saw was the lack of touch UI. A wireless keyboard/mouse combo works fine for almost all apps, but you might miss touch for playing some games and such.

Well there is a fix for that too, Rockchip has written an app that you can run on your phone and provide touch/accelerometer input remotely. With this app you don't need any other controlling device, but this keyboard/mouse thing is way more easily usable than unlocking your phone all the time.

There are Linux distributions that you can install on this too, like PicUntu. All in all, it's super bang for the buck at $50. Guaranteed to make your gadget thirsty soul happy :)

Android mini pc is a great innovation, its like you can have pocket PC in a very cheap rates and can utilize it whenever you need a laptop on urgent basis.